Posted by charlottemesservy on March 7, 2017 in Travel Philosophy |3 Comments

I hate a cappella.

These are just a few of the stories I’ve been telling for as long as I can remember.  I’ve told them so many times that I’ve honestly forgotten that my stories aren’t, in fact, everyone’s.   These seemingly insignificant opinions have become beliefs that have helped to create my worldview.  They are stories I try to prove true every day (especially the a cappella one).

In the teachings of yoga, these beliefs are known as samskaras.  My teacher described them as “the lenses through which we see the world,” citing Patanjali’s famous Yoga Sutras.

The creation of our samskaras occurred a very long time ago.  As children, we had a collection of experiences that we thought signified the world at large and, as a result, the things around us stopped being neutral.  Based on a small sampling of happenings, we decided to label things either good or bad.  Each time we encountered them, we’d seek consistency (i.e: coffee is still yummy/a cappella is still really, really bad) and these opinions would get more and more ingrained in us until they influenced our decision-making process and, ultimately, the directions our lives would take.

In yoga, we learn that these stories lead to pain.  Through a combination of our ego-driven thoughts, cravings, aversions, and fears, we miscomprehend the world around us.  This self-imposed ignorance is called avidya – which is the opposite of vidya, meaning “seeing clearly”.

Avidya is believed to be the cause of all suffering.  Yoga (which includes postures, breathing, and meditation) seeks to help us remove those lenses and see the world as it is in front of us, instead of relating all past experiences to the present.

I remember the day I learned about samskaras and avidya.  I felt completely overwhelmed and a bit freaked out.  Am I really the cause of my own suffering?  How can liking something be bad?  Have I let my fears influence my life? 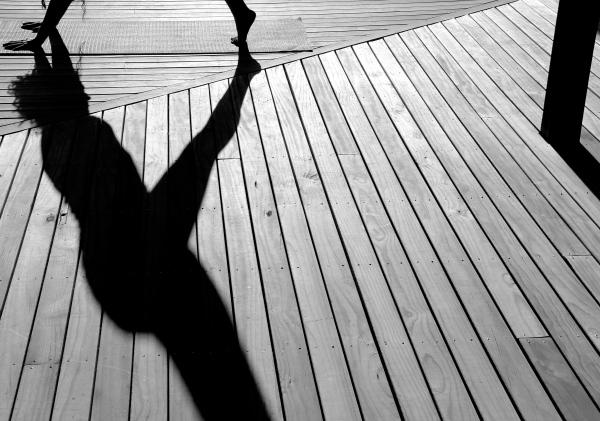 Then I got angry, looking to defend the beliefs I had developed.  Once that faded over the next weeks, I reluctantly started to realize that there may be some truth to what my teacher, Mark, had told me.  Eventually I stopped fighting the concept of avidya and attempted to go into my day-to-day life with an open mind.

It was not easy.

I tried to stop using polarizing labels for things, which meant the words good and bad needed to be banished from my vocabulary.  I started pulling back from making snap decisions and, instead, explored why I felt the need to decide something without half a second of consideration.  I observed my mind’s constant chatter, finding that the vast majority of it was either my ego trying to manipulate my emotions or cravings, aversions and fears from the past trying to make their way into my present.

As I started to notice the tricks my mind was playing on me, I saw a choice in how I interacted with the outside world.  “How do I want to respond to this?” was a regular question I would ask myself instead of the previous “REACT! REACT! REACT!” rally-cry my ego used to yell at me.

All of a sudden there were possibilities where there never were any before.  For example: If I decide that I don’t have any reason to be stressed about my presentation tomorrow, it stops being bad.  Then all of a sudden, it has the potential to be good.  These possibilities allowed parts of my daily life to become more enjoyable.  And overall, the impact of this small adjustment in approach made me wonder what else I could change through paying attention to habitual thoughts.

Once I started observing these patterns: for every smidgen of avidya I found, ten times more reared its ugly head.  It was immediately clear that getting through this process would take a lifetime of practice and then some.  And certainly, in my explorations, there were instances I felt I’d never be able to handle any differently (even with all the mindfulness I could muster).  They seemed like situations in which I brought no emotional baggage, but were still a cause of suffering for me.

It was just a couple of weeks ago when this came to a head.  I was sitting on a flight on the way home from a long weekend in Tasmania.  My mind quickly went into the downward spiral it always gets into on planes.  Looking back, it was just four-pointed, classic avidya:

These elements combined to create a feeling of full-on victimization during the flight.  Planes = bad.  Ground = good.  All my self-observation quickly went out the window.   I shut my eyes tight, felt the drop of the plane, and heard the screams of the babies.  But then I felt something new – something that wasn’t bad or scary at all – it was a knowing deep down inside.

This knowing was telling me that opting into this drama was a choice.  I had played the victim plenty of times before, but all that did was cement my discomfort with flying.  Despite how helpless I felt, there were things I could do to take back my power and it didn’t serve me whatsoever to put my energy into reinforcing my existing views, as they limited me.  I moved from the USA to Australia for God’s sake – why would I want to hold onto a fear of flying?

So I cued up a guided meditation, put both feet on the ground, sat up tall, and breathed deep and slow.  I counted my inhales and exhales.  When the plane inevitably dropped again, I resisted the urge to look for external help — I didn’t grab onto my partner’s hand like I normally would.  Instead I kept my eyes closed, scanning up from my feet to notice what physical reactions I had to these sudden jerks.

My shoulders were hunched, so I relaxed them down and back, opening my chest.  My jaw was clenched, engaging my abs and restricting the depth of my breath, so I let it go slack and my abdomen relaxed.  Just from these slight changes, I felt significantly less stressed and more in control.  My thoughts slowed as I breathed deeply and scanned over and over again to relax as much as physically possible.

The result of all this physical awareness was an emotional response – I felt peace at a moment I never could have seen coming.  And the next thing I knew, I was waking up from a deep sleep – safely on the ground.

As it turns out there is always something you can do to calm yourself during those helpless moments – it’s just a lot harder work than freaking out.

The stories we tell ourselves about our present and future can only be as creative as our stories from the past.  If we constantly react from our previous experience, we inevitably limit our futures.  What if it’s actually our attachment to our stories causing problems, rather than what those stories are about?

Only with mindful observation can we begin to remove the limiting views we’ve built our lives upon.  While it seems daunting to begin this process of self-awareness, from my initial experience in the last year, I am seeing major changes for the better in my day-to-day life.

Because why would we want to hold on to the negative beliefs we have?  Why let fear rule our decision-making process?  How does this serve any of us?

Despite how it may seem, there is always a choice.  I choose to trust myself and to have faith that I’ll be able to make the right decision for the present moment.  Let’s just hope the present moment doesn’t involve a capella.