Just Your Run-of-the-Mill Luau in Provence…

Posted by charlottemesservy on September 12, 2014 in France |One Comment 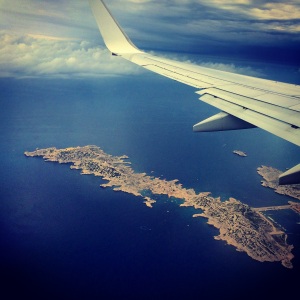 Before I left for my trip, Steve had informed me that a bunch of his friends were heading down to Marseille for a weekend in August and asked if I wanted to come.  This was all the information I had at the time, but I booked a one-way ticket and figured I’d continue my travels from there.

As it turns out, this wasn’t just any weekend away — this was the party of the year.  A group of about 10 of us left from Stansted and arrived in Marseille on Friday morning, decked out in Hawaiian shirts distributed by our party planner, Sarah.

We drove two rental cars what should have been an hour away to a vineyard in the middle of wine country, but this trip somehow took us closer to three hours given gate problems, wrong turns, smoke breaks, and other various stops along the way.  We finally pulled into a beautiful vineyard called Domaine Vintur in between a few villages in Provence.  James Wood (known by friends as “Woody”) manages the vineyard and lives on the premises, having built one structure to include the shop, cellar, and house.

My window in Le Barroux

We arrived and opened several bottles of rosé, cut up bread, cheese, and prosciutto and kicked our feet up for a bit.

Woody had organized for us to stay at a guest house in the neighboring village, Le Barroux. The village was located at the top of a hill, houses all adjoining and along narrow cobblestone streets.  It was incredibly charming, quintessential France.  There was just one restaurant and one shop in town, which was also the post office.  The guest house was big, with nine bedrooms and adjoining bathrooms.  We had about thirty people at the party, so most of them stayed here.  I shared a room with a vivacious Kiwi named EJ.

On our first night, Woody had organized a beautiful dinner at this restaurant on a terrace overlooking the region.  He provided Domaine Vintur wine for the various courses. It was a great way to start our weekend.

The next day EJ and I got up and walked down to the post office for breakfast.  Funny concept, I know.  It was so charming!  I fell in love with this little place.  There was a little market, a cafe/bar, tables and chairs, a couple of resident dogs who would tap a paw on the window to be let inside.  Everyone said “Bonjour!” to everyone as they walked in.  EJ and I lingered here for three hours, starting off with cafe au lait and eventually buying the fixings for sandwiches and beers.

I looked it up and apparently the village is home to 615 people.  The people-watching is spectacular.  My favorite moment was when a father came in with his three of four year old daughter.  She had a very chic, French bob with bangs, was wearing a pink Hello Kitty t-shirt, pink Crocs, and pink underwear but no pants (“trousers” to you Brits).  She was too old to leave home without pants but it was just the kind of neighborhood where it didn’t matter.  It was a warm, cozy town.

The remainder of Saturday was a luau being held at the vineyard.  Yes, that’s right, a Hawaiian luau (luckily I packed that dress from Maui)!  In the afternoon, we all drove back to the vineyard where there were “cold pools” set up to help manage the 87 degree heat, as well as a considerable amount of blow-up animals and palm trees.  There was a grand feast being prepared in the kitchen. Seafood of every type was on a spit, the scents of garlic and lemon filling the air.

Lunch was spectacular.  I tried two new types of seafood.  We had prawns, clams (razor and regular), sea snails, squid, rice, grilled veggies, bread, there may have been meat too… I don’t remember, but I’m certain it consisted of the most delicious things.

The remainder of the day and night was spent relaxing, playing bocce and pool, losing at the hardest game ever (a game that involves not smiling, which is impossible for me) and getting to know a lot of very worldly and interesting people.  At this one weekend, we had representation from the UK, France, South Africa, New Zealand, and the U.S.  We had all ages and a whole mix of personality types.  The day included spontaneous singing, numerous heart-to-hearts, some inappropriate toasting, and some romance for a select few (no names included, roommate).

You couldn’t pick a better setting.  The sunset was bright pink and stunning with the rolling hills all around you.  And later on, the stars were spectacularly clear. 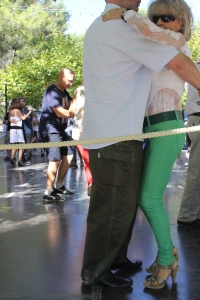 Sunday was left unplanned, so we began with another several hours at the post office and decided to pile into a car and explore the hills around us.  Within 15 minutes, we stumbled upon Lac du Paty and found ourselves at a beautiful turquoise lake with a big patio, cafe, picnic tables, stage, and traditional French band (accordions and all).  It was one of those serendipitous moments I keep coming back to when I think back on the last weeks.

We sat at picnic tables and relaxed, listening to the band and watching a crowd forming on the dance floor.  I felt a tap on my shoulder and had a hand reaching out to me.  It was the hand of Louis, a seventy five year old Frenchman who wanted to dance with me.  In the spirit of adventure, I said “oui!” and was pulled tight against Louis’ large gut for a waltz.

Waltzing with Louis (on the right).  Image c/o Emma Deighan

Louis did not speak a lick of English, so this was a good test for me.  I took French in high school, ten years ago, and have barely spoken since.  I had been surprised how much was coming back to me as I was thrown into these situations.  However, in reality it came out as some really bad, broken, un-conjugated verbs I’m sure.

After the dance ended, I excused myself and walked down to the water with three ladies from our group to dip our feet into the lake. 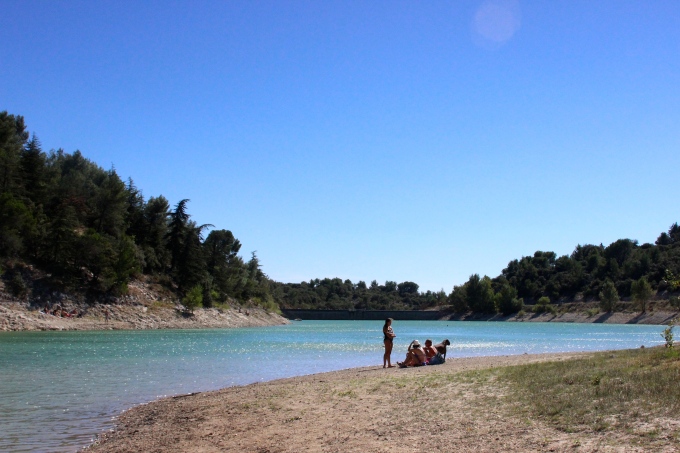 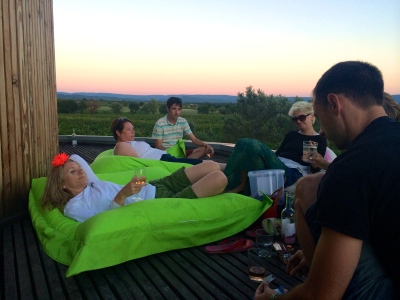 The evening was spent lounging on the roof of Woody’s house and eating pizza.  Everyone was exhausted from the weekend but had a spectacular time.  Even though I only knew Steve when the weekend began, I got to meet a whole bunch of incredible, sweet, funny, and interesting people.  Thank you all for having me and showing me such a great time.

As a side note, I thought we did these types of weekends well in the U.S but this weekend completely changed my standards.  I’ll start brainstorming something spectacular, friends.

Recent Posts
@charlottemesservy
Cheers to @weemickeyjoe who’s 35 today and finally purchased his first jar of moisturizer.
%d bloggers like this: