Posted by charlottemesservy on July 8, 2014 in Before Takeoff, Travel Philosophy |3 Comments

After committing to quit my job and travel, the next step was answering the daunting question: where am I going to go?  Just like getting to the point of quitting, I went through lots of phases of thinking in terms of what I was going to do.  The internet is a spectacular resource for modern day travelers, but trying to sift through so much information is overwhelming and left me more conflicted about where to travel and how to get there.

The day before the Vermont Covered Bridge Half Marathon, my brother and I got to thinking – when you want to go absolutely everywhere, where can one possibly start the planning process of a round the world trip?  We decided that the best way to start was using the process of elimination.  We laid a world map across my mother’s dining room table and started researching.

Next we looked up the most expensive places to visit and marked the top ten off in green.  Then marked the cheapest places to visit in blue.  The list we found was great – they totaled the average daily cost per city of one night at a hostel or cheap hotel, transportation, a tourist attraction, and three meals (and even three beers). The countries we marked include all of these items at under $50 per day.  Again, we had some questions as to the validity of the list – it said the average in San Francisco was $75 for the same amount of items, which is just not possible, but hey, it helped us get an understanding of where my money would go the furthest.

After establishing all this, I wanted to be sure to keep sight of my top destinations.  Just because they are the most expensive or not considered safe, doesn’t mean I don’t want to go!  So I marked the places I’ve been dying to go with asterisks in black.

Here is what we ended up with. 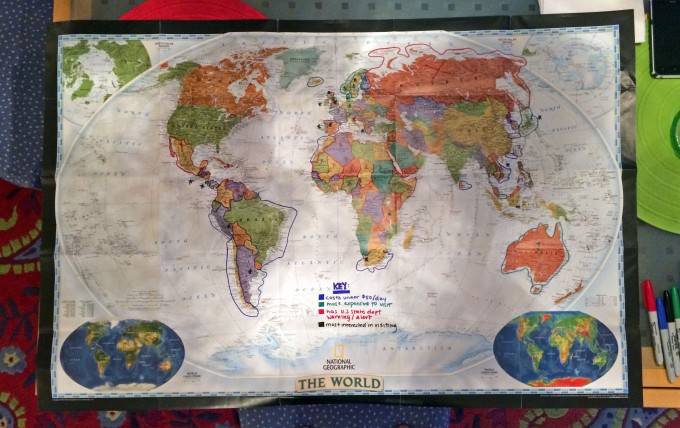 *If you’re wondering why I marked Wisconsin, you can ask my stepfather, who watched with skepticism through this whole mapping project (as you can see in the pictures, c/o Max Messervy).  He really wants me to go to his home state.*

The exercise was symbolic, more than anything, because it allowed me to visualize what I was choosing to do, what the route could be, and provided strategies to simplify the planning of something so daunting.  After creating the map, my mind was open and I was able to think more tangibly than I had been able to before.  It also helped me focus in on what I was looking to get out of my upcoming adventure – to define my trip goals.

The initial desire I had in taking a round the world trip was for a perspective change.  I want to not know and not be in control of everything.  I also want to be a bigger risk taker; I’ve been a bit of a scaredy cat for as long as I can remember.  I want to avoid winter completely; I cannot take another New England winter.  I want to live next to the sea for an extended period of time.  I want to take ridiculous amounts of spectacular photographs.  I want to re-envision my life and choose aspects of it with intention, rather than falling back into a job and a way of life that doesn’t fulfill me.  Clarifying my goals was helpful because I was able to prioritize locations after that point.

At that point, it was time to start researching.  I had heard and read about round the world trips which require you to go in one direction.  For some reason, the concept of committing to that really freaked me out, so I was really happy to find this excellent resource for RTW trips and bookings which allow you to zigzag as much as you please.  Here is the first route I created, so you can get an idea of what I was thinking my trip might be.

I was initially looking into going everywhere I’ve ever wanted to go.  Not just going… flying.  And buying all of the trip in one fell swoop, therefore locking me into an itinerary which I’d be booking from the comfort of my one-bedroom, air-conditioned apartment with my best friends within a mile of me.  Who knows how I’ll feel after month four on the road, when I know no one and don’t speak the native language?

My wise and adventurous friend Lisa (check out her blog here) said what I needed to hear: You’re spending most of your hard earned money on airfare.  Spend longer in each place and leave your itinerary open so that you can find out about the places tourists don’t go and have a more culturally rich experience.  So that was that – I dropped the notion of booking all at once, because I like the freedom it allows as well as the time it gives me to research and structure my trip until it gets down to the wire and I need to buy another ticket.  I also took South America and Africa off my list and decided to focus in on Europe, Southeast Asia, and Australia/New Zealand as my top priority destinations.

I chose these locations for different reasons.  I’ve been to France, Italy, and Amsterdam before, but if you were thinking about traveling the world, wouldn’t there be a big part of you that just wants to eat kilos of cheese and drink barrels of wine out on a cobblestone street next to thousand year-old fountains?  Yep… me too!  So I decided to live the dream for a bit, despite the higher price tag, and do Europe.

My planning started to take shape when I started tapping into my resources.  I have a very generous friend who has been trying to coordinate a visit for about 6 years now and he is willing to put me up in his London flat for as long as I please, which will allow me to explore London with an insider’s perspective and also offers me a lot of peace of mind.  That made it easy to choose London as the place that would kick off my trip.

However, when booking the first leg, my flight from Boston to London connected in Iceland, so I decided to spend my first three days is Reykjavik to explore the spectacular natural wonders before jumping across the pond (can I say that yet?  I don’t even know if it applies here).  After a week in London, I’ll go to the South of France then over to Spain and Portugal. I’ll eventually meet up with my brother’s best friend in Southern Spain, then make my way up to Germany, Austria, and eventually I hope to get to Croatia and Greece. I am leaving it open, just as instructed, and will need to keep remembering that I don’t have to do everything during this one trip.

Southeast Asia was my next choice for so many reasons: it’s cheap (like really damn cheap!), it’s safe for a solo American woman to travel, it allows me to avoid winter (Boston, I will not miss your weather!), it is culturally rich and exotic, the food is spectacular (and did I mention cheap?), it is craft oriented (which is intriguing to me), and it is close to Australia, which I’ll explain in a second.  Also, Bali.  You know when someone tells you to picture yourself somewhere relaxing or on a beach or whatever?  That’s Bali for me and it has been for a very long time.  I long to smell the rice paddies and walk along black sand beaches there.  So yes, these are the reasons I chose Southeast Asia.

Australia and New Zealand might be a bit of a cop out, because I grew up going to these magical, mysterious places.  My father is Australian and his parents lived outside of Sydney on a salt water lake, which as a kid, was pretty much the craziest thing I’d ever heard of.  I still remember an octopus washing up on their little beach, blue tongued lizards perching on our lawn, pelicans scooping up fish outside our porch window, and being completely stunned and in awe of this strange, spectacular country.  After my grandfather died, my grandmother moved up to a surf town called Noosa Heads, which we would visit later on and had a very different feel but was equally intriguing.  My last trip was at age sixteen and I am dying to re-discover Australia and New Zealand as an adult.  It still feels like a second home to me and I feel so much more confident about going to Asia because these islands are so close in proximity.  If I’m strapped for cash, having a place I can legally earn money is another comfort.  Finally getting to use my dual citizenship would be fantastic.

These decisions were just the beginning!  I have a lot more planning to do – my head is spinning with the smallest details I need to get done.  There will be much more to come.

Recent Posts
@charlottemesservy
Zoom yoga is still weird but also pretty amazing and offers a whole new set of possibilities which I find exciting. I’ve gotten to see the cats, dogs and babies of many loved ones after class. I’ve gotten to teach friends and family who have never been to my class (due to living across the world from them). I’m being challenged to simplify my teaching and slow down a bit (which I need)! I’m teaching Gentle Hatha at 8am tomorrow aka Friday Sydney time (which is 5pm NYC time on Thursday). Anyone is welcome to join. Pop in on zoom meeting ID 800-367-387 if you want to join or send me a note and I’ll email the invite 😘
%d bloggers like this: