Posted by charlottemesservy on October 15, 2014 in Travel Philosophy |10 Comments

I looked around the dinner table and took note: England, Canada, the Czech Republic, Switzerland, Australia, Finland, the Netherlands, the United States.  Every person sitting here is from a different country.  Every person sitting here came alone.  This group feels like some sort of family to me and I struggle to stop my brain from completing this thought: “this moment will never exist again” because, well… that’s just depressing. 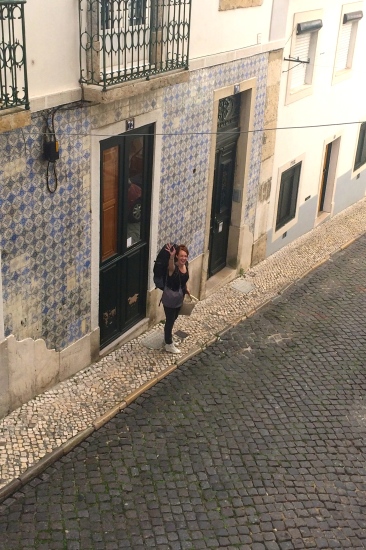 I’ve had countless moments like this over my two months of travel.  You meet incredible people in the strangest places.  You spend three days as best friends.  You say goodbye and someone new is assigned to their bed.  It’s quicker than you can imagine but the weight of these relationships can’t be valued based on sheer time spent together.  You’re connecting with people in a fleeting moment in which you happened to be in the same country, in the same place, in the same moment in time.  It’s vulnerable, it’s magical, it’s absolutely unique.

So much of traveling is the social aspect that comes with it.  At this point, I’ve experienced a whole range of new types of relationships.  I’ve met people like me, who are traveling for many months, as well as people just taking a week’s vacation.  At the moment, staying in the same small hostel are both an eighty year old man who speaks no English and spends hours silently looking at maps and a twenty-two year old girl who is only here to take a break from months of Couchsurfing.  You really never know who is going to walk in the door.

I have found that within five minutes of meeting them, my instincts give me a clear indication about whether I want to befriend a person or not.  Sometimes for no apparent reason, my gut just says, “Nope! Not them.”  Later on, a reason will reveal itself.  And if I do decide I’d like to steer clear of someone, there’s only so much distance that can be created when we’re staying in the same place for days.  I certainly don’t want to be rude, but I have felt less and less bad about deciding I don’t really want to be associated with certain people.

Who are they?  Generally it’s the really opinionated people who talk over others, “the one-uppers”, the people who are super-flirtatious (both male and female), immature kids, shady dudes, and anyone who naturally seems to lack a level of respect for their peers and the culture they’re in.  There are always going to be a couple of these people around, but they don’t matter.  You ignore them and the good people completely outshine any negativity in the environment.  If you have a positive attitude and an open mind, you will have friends whenever you want them.

The fleeting relationships in this situation naturally take on certain familiar roles.  The people I’ve met stick with me and inspire me everyday.  I wanted to share a snippet about some of the standouts.

My first travel best friend is Marketa, who I referred to in a previous post as “a beautiful, tall blonde from the Czech Republic.”  She took me in on my first night in Baleal and became the person to gossip with, vent to, late night snack alongside, contemplate life with, or silently observe next to.  She has the kind of positive energy that infects everyone around her and I can’t wait to see how she uses it.  I will meet up with Marketa in Prague before I head over to Asia.

Me, Tom, and Elsie on my birthday

My travel brother is Tom.  We learned to surf together over two weeks.  I publicized his 31st birthday celebration around camp our first week and he publicized my 29th in the second.  We poked fun at each other constantly, but he has a heart of gold and was a great person to talk to, dance with, or surf alongside.  Someday we will meet up again!

My travel sisters are Elsie and Michelle.  Coincidentally they each had a week sleeping on the bottom bunk directly below me.

Elsie is the most mature, well-adjusted nineteen year old I’ve ever met.  She had this quiet courage that somehow took her through five months of round-the-world travel without an ounce of drama or self-centeredness.  In the weeks we spent together, she taught me about the kind of traveler I want to be.  I put her in a cab the morning she was heading back to Australia and have been trying to keep up her travel mantra on my own trip: “What would you do if you weren’t afraid?”  I’ll be meeting up with her Down Under.

Michelle is a spark-plug from New Zealand.  She has a youthful energy and a contagious laugh.  She’s a seasoned world traveler and is going on her current trip solo, like me.  I’ll meet up with her in Southeast Asia somewhere!

My escape is Mike.  He’s the kind of person who will hand you his own jar of Nutella and a spoon and won’t be mad when you finish it (and won’t judge you for eating Nutella with a spoon).  People wanted to be mad at him because he is such a good surfer, but couldn’t muster up the energy because he is also a great guy to his very core.  We’re meeting up for a road trip across Ireland in the near future.  Many leprechauns will be found and photographed. 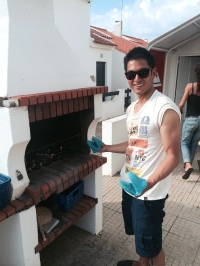 My awesome couple friends are Charlie and Becca.  I met these two on a shuttle bus and was immediately drawn to their gung-ho attitude about surf camp, something I don’t think many couples can have together.   I’m always impressed when a couple can maintain their individual identities as well bring out the best in each other.  I am also impressed when couples have choreographed dances with each other.  Congratulations on the upcoming wedding, my friends!

My favorite wingman is Will.  He will stay out late with you to make sure you don’t walk home alone, cook an amazing dinner for you wanting nothing in return, and almost miss his flight home, spending the night in the hospital with you (not me, the general you).  He is, without a doubt, one of the most generous people I’ve ever met.  I wish I could visit him in Switzerland, but won’t make it this trip! 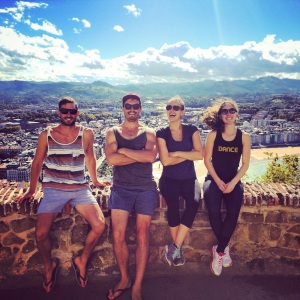 My resident bros are Kieran and Regan.  These two met on a bus in Brazil traveling alone and have been friends ever since.  They are surfing around Europe and South America together.  Kieran, 28, has essentially the exact same story as I do – quitting his corporate job and prioritizing travel.  It was so nice to talk to someone who had the same perspective, even though we’re from different countries.  I hope we’ll meet up somewhere along my route and these two can make me a stronger surfer.

The friend who got away is Catherine.  She’s a super-cool Melbourne dweller who I only got to spend one day with.  It was not nearly enough.  I will meet you in Vietnam, Cat!

My amazing travel companion is Chuck.  He’s been a family friend for years and has been living abroad in Brussels for work.  When I decided to come to Europe, he invited me to join him for a week exploring Southern Spain.  We had the best week jumping from Cordoba to Granada to Sevilla.  We toured, siesta’ed, and tapas’ed our way around these amazing cities.  I saw a burro yesterday and thought of you, Chuck! 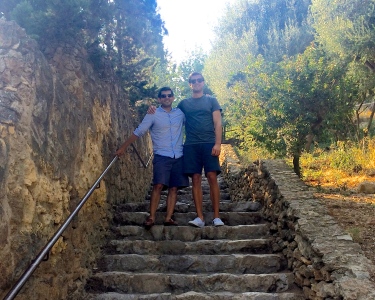 My saviors are Brian and Oscar.  After showing up in Barcelona alone, I realized I knew no one.  My friend from home put me in touch with her boyfriend, Brian, who is studying law abroad this semester.  Brian generously took me under his wing and introduced me to his roommate Oscar.  The three of us sampled the best of Barcelona and almost got killed by a tower of people on the National Day of Catalonia.

These people are just a handful of memorable characters from the past two months.  It’s been hard to leave them all and to keep moving, but goodbyes are the nature of this lifestyle.  Luckily, nowadays with Facebook, email, Instagram, Whatsapp, FaceTime, Skype, and all the other options for keeping in touch, I am still connected to them.  I only wonder who is on deck!