Posted by charlottemesservy on September 10, 2014 in England |No Comments

In my last post, I admitted that my week in London was not what I expected.  But despite dealing with some negative feelings, I had a great week and really loved the city.

You’ve all seen plenty of photos of London’s many tourist attractions, so I won’t bore you with those.  My highlights for the week were mainly the people.  I have always heard that London is the cultural center of the world.  Now I agree with that sentiment.

Every single person I met (and I’m not exaggerating) had either come from another country and/or did significant international travel.  It isn’t abnormal at all to move away for a year or ten.  It isn’t abnormal to quit your job and travel, just like I’ve done.  No one gawked at me like I sometimes got when telling people in the U.S about my trip.  There was an overall acceptance of people that I really appreciated.

This all being said, my best memories are below.

My first night in London, Steve and I went and walked down on the bank of the Thames at low tide, wandering through crowds and catching up.  We eventually got to the South Bank Market and got two absolutely delicious dishes and a bottle of Pinot Noir and took it up to a park overlooking the river.  This, along with the Broadway Market afternoon I mentioned in my last post showed me how limited Boston’s street food scene is.  I’m sorry but it’s true!

2. Attending a stranger’s going away party 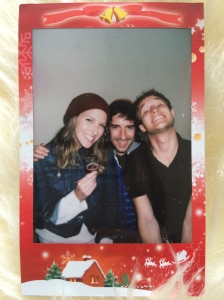 I attended a going away party for Steve’s friend, Georgie.  She was moving to Australia (see what I mean!) and had her friend’s meet up at a park to celebrate.  There was a little house set up with tables, a bar, food, and a bathroom.  (I guess you can rent them out?  This is something the U.S needs to adopt.)  Then outside was a moon bounce (for the adults), big block Jenga, and twister.  We had a great time hanging out, taking polaroids, and playing games.  The evening ended up at another attendee’s apartment with a dance party – the sign of a good night!

I studied modern art in college and loved the conceptual nature of it, weird as it could get.  The Tate Modern was the perfect size, layout, and organized in a way that flowed well.  Plus it had Rothko’s last paintings.  I love Rothko.

Kew Gardens was just beautiful and serene.  It’s a bit outside the city in a very cute area.  I particularly liked the redwoods and poppies.

Churchhill War Rooms was the perfect size and had an interesting story, despite the slightly claustrophobic feeling it enstilled.  The map room was Steve and my favorite part.

Outside the Tate Modern

4. Meeting my uncle and aunt for a fancy meal

I found out via Instagram that my uncle and aunt were in London at the same time as me.  (Thank you social media!)  They invited me to attend lunch at Simpsons-On-The-Strand, a traditional English restaurant attached to the Savoy.  This lunch was spectacular.  Meat carved in front of you, Yorkshire pudding, beets, shrimp, Brussels sprouts, delicious bread, and best of all, Treacle pudding.  I’ll never forget it.  We had a spectacular three hours catching up and stuffing ourselves to the brim.  Thank you Jeff and Kristin!

Steve runs a netball league (playnetball.com), which is a sport we don’t have in the States (at least, not that I know of).  It’s kind of like a mix of basketball and ultimate frisbee from what I can tell.  It looks fun but I am pretty sure I’d be terrible.

After games, the Netballers go out to a local pub.  I got to attend one of these outings on my last night in town and had so much fun chatting with the players.  Every person I met was interesting, worldly, quirky, and nice.  The next morning, I traveled to France with many of them so you’ll hear more about them.

I’d like to go back to London and experience it in a slightly less vulnerable moment.  I could see myself living there someday very happily.  Next up is France.